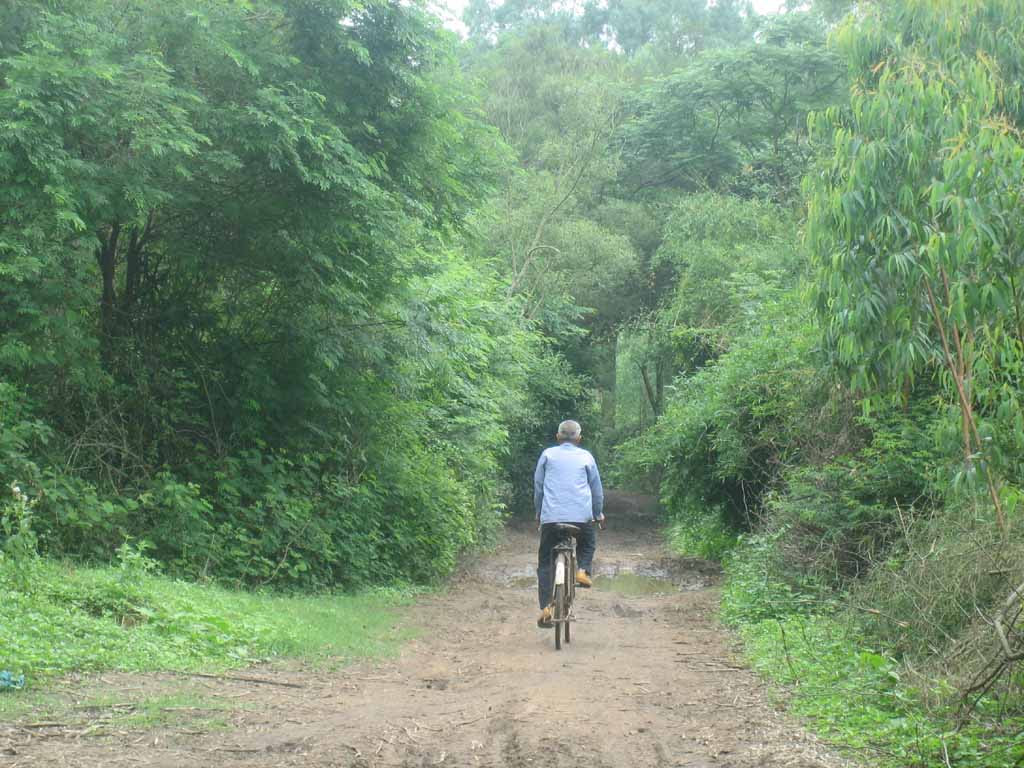 The May holiday has been shortened. The government opened up a couple other holidays during the year, and shortened the May golden week to 3 days. I think the idea was to cut down on the massive crowding on mass transit, especially trains. Not sure what I think about it, because I am afraid the average working people may not be able to see their families as often this way, but the crowding problem is something that had to be addressed. It's not easy, you know, when you have 1.3 billion people to keep happy.

Thursday, Snow and Fly and I traveled to Fly's home in the country. His folks are farmers--mainly sugar cane. I like the quiet peacefulness of the South China countryside. Not sensational, really, except for the bamboo trees, I guess that's a little unusual, but mainly just peaceful and pretty.

Yesterday I went with Snow to visit with her grandmother. On the way, I saw a big billboard proclaiming Hu Jintao's statement re: development the North Coastal part of Guangxi Province. Hmmm... so all this development really is coming from the top. Orders from headquarters. Not sure what I think of it. I am always reticent about top down development. Better to create an economic environment where development can happen naturally. I can remember another top down development initiative that really worked. Shenzhen. This was Deng Xiao-ping's idea. But Shenzhen was different, because it sits right on the north side of Hong Kong. I mean right on the border. The Chinese were right next to all this wealth and not benefiting from it for no other reason than that it was against their religion. But their religion let them down, so they abandoned the faith and opened the floodgates. Manufacturers in Hong Kong were invited to open factories throughout the Pearl River Delta in a bonanza that increased their profits exponentially. They already had established markets, and had developed a business structure that was managed tightly enough to preserve some measure of profit after expenses. Now they were handed an opportunity to drastically reduce their production costs, and they didn't turn down the invitation. The Hong Kong -- Pearl River alliance became very, very competitive worldwide, and the result was phenomenal development in both Guangzhou and more sensationally, Shenzhen, a small fishing village which exploded into a metropolis of 12 million people.

But Beihai is not Shenzhen. There is no Hong Kong nearby. The development of Beihai seems to be more focused on tourism. Not quite sure if the growth of tourism encouraged by the development will eventually generate enough capital to pay for the investment. And This quiet town will probably never be the same. But I don't hear any of residents of Beihai complaining about all the development money flowing in. It is only reasonable that their wishes be considered before those of people like myself, who stop by from time to time.