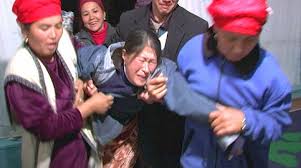 Actual bride kidnapping in the country of Kyrgyzstan

This video (below) is disturbing. So why watch it? Later, I am going to do a podcast about arranged marriage. This video shows an extreme example. It serves two purposes:

Second, sometimes when you are at the point of discussing an issue about which there can be significant disagreement, it is useful to take the issue to an extreme that both sides can either accept or reject. So, for example, during the Cold War, Democrats and Republicans disagreed about many points of policy, but they all agreed that Communism was bad. They were right, of course. Even China has now rejected traditional Communism.

More recently, we were beset by ISIS. Democrats and Republicans have been at each other's throats like never before, but on this issue they agreed. ISIS was bad and had to be defeated.

You see, sometimes if you can identify an extreme that you both sides find deplorable, it is a little easier to move from that extreme to the point where your viewpoints diverge, and then you can begin to establish what we call stasis. It's a rhetorical term, but it basically refers to the process of agreeing on what you disagree about. Sounds obvious, but you would be amazed how many times two people or groups of people will waste enormous amounts of energy arguing about something before they discover that they are basically on the same side (at least partly). This happens because they have not done a good job of establishing stasis, or because they are struggling with the process.

So watch the video. I have shown this video to many groups of students, with a variety of reactions (which we will discuss later). I should note that this is a very old video, so you will probably not be able to watch it on your mobile device. But I usually don't have a problem watching it on my laptop, although it may ask you to enable FLASH. Anyway, it is short (about 18 minutes), but very well done. Again, is quite painful to see (forced marriage is not pretty), but I do think it is useful as a take off point for our discussion of this issue. I also recommend that you full screen the video once you get it open.

Please note: The video below requires flash. Click on this link if your flash isn't working: