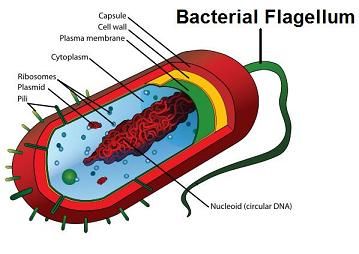 One-cell bacteria showing the flagellum. Our concern in this lesson is with the highly complex motor on the inside that makes this whip spin.

What is a flagellum? It is a whip that acts as a propeller. It is used for the purpose of propelling bacteria.

In Lesson 12, we talked about the fact that complex organisms clearly demonstrate design. Dr. Behe used the example of a mouse trap to show how complex micro-machines in a cell could not have evolved, because all the parts had to be there for the machine to work at all. Natural selection doesn’t work if you start with something that doesn’t work even a little bit. If you haven’t been through that lesson, you might want to take a look at it. But if not, this one reiterates much of what was introduced in that lesson, so if you pay attention to this lesson, you will be able to get the basic idea.

As you watch the video below, you will need to remind yourself continually that the motor you are seeing is tiny. As you are watching, it will fill the screen (actually an animation of it). But it is microscopic. You can’t see it without a microscope. Darwin did not know it existed, because he did not have a microscope. If he had, he never would have been able to write On the Origin of Species by Means of Natural Selection, or the Preservation of Favoured Races in the Struggle for Life. But he did not have a microscope, so he had no idea how incredibly complex microorganisms are. So it was easy for him to imagine that life forms developed through a series of mutations.

Don’t get me wrong, even without a microscope, the highly religious doctrine of evolution is ludicrous, or at least very incomplete. Why do I say this? Because even if you allow yourself to suppose that higher organisms evolved from very primitive life forms, that does not explain where the environment in which they developed came from. That is why when I am talking to students, I rarely ask them about biology. I say, “Who put the stars in the sky.”

I once watched a debate between John Lennox and Richard Dawkins. I can’t remember exactly how Lennox put it, but his question to Dawkins was very similar to the one I often ask students in China. Dawkins said, “I don’t know. Maybe there will be a Darwin for that part some day.”

So where do we go from here? I have had a love-hate relationship with apologetics all my adult life. It just never made sense to me to waste time arguing with someone who chooses to believe something stupid. Why? This is what the Bible says:

Answer not a fool according to his folly, lest thou also be like unto him. (Proverbs 26:4)

Don’t lower yourself to argue with someone who is spouting nonsense. No one with any sense is going to believe him anyway. So I stayed away from apologetics. I liked C.S. Lewis. But I refused to read Mere Christianity. And I had no interest in the creation—evolution debates that were a common place of 70s academia. Then one day I was sitting in the library reading a science magazine—I think it was Scientific American. They were talking about how “debate was not really the proper format for resolving these issues.” Obviously they were losing. If they had been winning the debates, they would be talking about how important debates are.

You see, if an idea—such as the idea that a highly sophisticated motor that spins at 100,000 rpms could have evolved by a series of random mutations—begins to be regarded as not only legitimate, but even respectable, then sometimes you need to get down into the arena and debate that idea to expose it for the stupid nonsense that it is. Why? This is what the Bible says:

Answer a fool according to his folly, lest he be wise in his own conceit. (Proverbs 26:5)

So watch the video. The most interesting part of this video is about a curator in Germany who was setting up a display to celebrate Charles Darwin. He had set up a scale with Darwin’s On the Origin of Species by Means of Natural Selection, or the Preservation of Favoured Races in the Struggle for Life on one side, and a few books written by “creationist” nut cases on the other side. The display showed the side of the scale with Darwin’s book on it to be lower, showing that all the objections to Darwin’s idea put together could not outweigh Darwin’s logic. As he was building the display, he picked up one of these books he has dismissed as nonsense and started reading it. He couldn’t put it down. He had come from a totally secular, non-religious background, and had taken a lot for granted. But in reading these well reasoned arguments, he saw that these people were not stupid. They were intelligent scientists who were pointing out serious flaws in Darwin’s thinking. The curator who built the display to honor Darwin now no longer believes in Darwin. And you won’t either after you have seen this video.