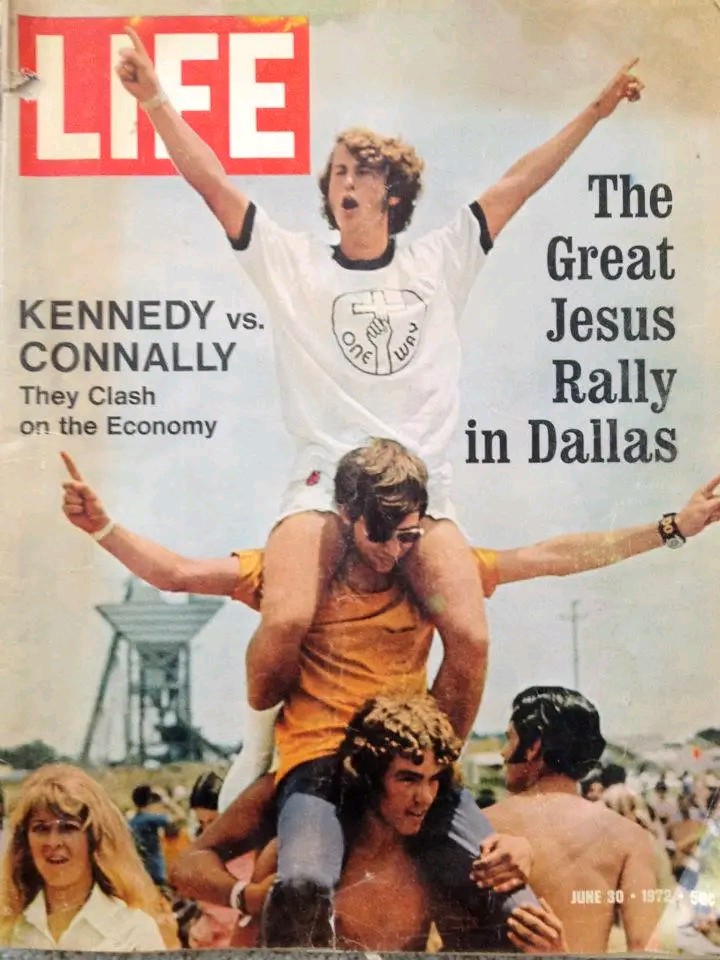 The podcast leaves you in Clarksville, Tennessee, after my return from the Democratic convention in July of 1972, This is because, as it turned out, Mary and Dennis were moving back to Oregon the end of August, so I decided to just wait and ride back with them. So my hitchhiking adventure was over for that summer. It wasn’t exactly the end of my hitchhiking; I hitchhiked down the Kenai Peninsula in Alaska with John in the summer of 1979 (another story for another time)

What were the factors that led to the great Jesus revolution of the Seventies?

The Jesus movement was a spiritual revival among the counter-culuture “hippies” who had more or less dropped out of the ordinary course of life in cold war America, particularly during the period of the Vietnam War (1964-1974).

The hippies were the offspring of middle class Americans who had focused their attention on developing financial prosperity, mainly as a reaction to the deprivation of the Depression years. The years following the depression and the second world war were years of prosperity, which resulted in a “baby boom.” People who had spent their childhood in the Depression were very focused on developing the kind of success that would protect them from ever having to return to what they had seen as children.

Americans who had grown during the Depression years were understandably determined not to suffer the deprivation they had seen their parents endure. The problem was that as they focused on developing economic affluence and security, they often neglected the deeper side of life, so their children grew up with a sense of aimlessness that made them weary of the material affluence their parents had worked so hard to give them.

Futility. What’s the meaning of it all? This feeling of futility was greatly exacerbated by the Vietnam War, which the Americans just couldn’t seem to win. Those who have lived through the Iraq and Afghanistan wars have no idea—these modern wars are fought with minimal American involvement (roughly 2500 American casualties in Afghanistan and 4500 in Iraq). Almost 60,000 American soldiers died in Vietnam (58220).

Seeing so many people die for a war that the Americans just couldn’t seem to win, created a deep, nationwide despair. In addition to this, the mainstream media billed the war as unwinnable. In February of 1968, the Tet Offensive caught the South and the Americans off guard, and made for depressing news stories. But what many Americans to this day do not know is that the Tet offensive was a disaster for the North. The attacker always has the initial advantage. So what? The fierce response by the South, aided by the Americans devastated the North. But the mainstream media, led by Walter Cronkite, sold it as a defeat to the American public.

I remember the Tet Offensive, but I did not know at the time how badly it had been misrepresented by the media. I first became aware of this problem when I read Nguyen Cao Ky’s book. It’s been years, now, since I read it, but he expresses his astonishment at the Americans for regarding such an extraordinary victory as a defeat. And he wasn’t the only one. Here’s a comment from a Vietnam vet on an article praising Cronkite’s response to the Tet offensive. The article is favorable to Cronkite, but the comments in the comment section below the article are ruthless in their repudiation of his nefarious influence on the American public, and were written by people who knew a lot more about the subject than the guy who wrote the article:

I was there with a rifle in my hand, BUNKY. . We totally destroyed the VC and they never again were a viable force. , We had the NVA in full retreat across the Cambodian boarder and the DMZ. –Mathew Molk

There were lots of problems with Vietnam, so it is not my intent, here, to blame the whole national disillusionment on one journalist. Still, with the media presenting a false story of what was really going on, it was all but impossible for the nation to be unified. And after Nixon resigned, it was all over. The North Vietnamese were afraid of Nixon. But after he left, they started violating agreements they had made when he was still president, and took the weak, half-hearted response from the Americans as encouragement to keep going, with the result that the Americans escaped literally from the roof of the embassy.

But I’m getting ahead of myself. That was three years later, in 1975. This was 1972, four years after Cronkite’s commentary, and three years before it all came to an end.

So the first factor was futility, with the inability or unwillingness to get out of the quagmire a big cause of that futility.

The second factor, I think, was a sense of ambivalence. Ambivalence about life, and ambivalence about God. In the words of Desiderata, a poem that was popular when I was a senior in high school, “Therefore be at peace with God, whatever you conceive Him to be.” Whatever you conceive Him to be?? What arrogance! Do you allow people to believe in you whatever they conceive you to be? So this generation with a sense of ambivalence about who they were, and what their powerless country was, and with nothing more to rely on than a DIY God, had a strong inclination to give it up. To throw everything to the wind, and just experience existence for whatever it was worth.

You see, a God you have to create the definition for is really no God at all, and that was the real point. For many, many young people, there really was no God, and this life is really all there is. There’s nothing else.

It’s hard to describe my relationship with this ambivalence and futility. I did not believe it, especially the idea about God being basically created by man instead of the other way around. But I felt it very deeply. I just didn’t know the cause of it. How could a generation like the generation of my parents, which was so focused and ambitious, beget a generation so unfocused and ambivalent? But the question is flawed. “Desiderata” was written the year my mother was born. The self-made God idea came from them. “Pull yourself up by your own bootstraps.” In other words, you are the only God you can rely on.

I took a sheet of notebook paper, and drew a line down the middle. Then I drew a horizontal line across from one side to the other. Then I drew a diagonal line, and another and another until I had a asterisk covering my page with the spokes of the wheel coming out from the center. I started writing on the lines, one word on each line. Believe it or not, I didn’t even think to count the words until the other day when I was reminiscing about this. When I was finished, I had written exactly twenty words.

I wrote those words down the side of a piece of paper and submitted it to the literary magazine at South Salem High School. Believe it or not, they published my “poem.” In retrospect, that may not have been such a good idea, because it had my name on it, and someone who did not know me could be justified in concluding that I was expressing my own philosophy. That’s because they didn’t see the original. You see, I had not written it as a poem, I had written it on the spokes of a wheel as a vortex that was sucking in an entire generation. But can one express the futility and ambivalence of the sixties in only twenty words? You decide. Here are the twenty words:

I did not want to be swallowed up by that vortex, and I saw the Jesus revolution as an antidote to the emptiness of that futility and ambivalence. Many things can be uncertain and indefinite and life still goes on. There is still hope. But there is no hope if God is not definite. We do not define God. God defines us.

So I wanted to leave and never come back, and that brings me back to what I said at the beginning of the podcast. I said that God said yes and God said no. How do I explain that? The best analogy I can think of is Jesus in the temple as a little boy. You see, his parents were very frustrated with Jesus, and their frustration was understandable, but he hadn’t done anything wrong. His behavior was not rebellious. You could say it was childish, but he was a child, after all. It’s not wrong for children to be childish. The whole reason kids need parents is so their parents can cover for their childishness so that they don’t get hurt by it. Mary and Joseph failed to do that. But God had mercy on them, too. He understood that they had quite a child on their hands.

We certainly should discipline children when they rebel against authority. But we should be very careful not to discipline children for being children. But to my point  God favored the desire of Jesus to be about his father’s business. But he also made Jesus go back to Nazareth and grow up to be the son of a carpenter.

So in like manner, God perceived my desire and helped me make that summer more than just a field trip. But God also made me come back. God knew that the work he had for me to do required more education that I had at that time.

From where I sit, fifty years later, I can see now, how sometimes the mundane routines of life are just as important in shaping you into the tool God needs, as the excitement of an Explo 72 experience. Jesus had to wait eighteen years to begin the ministry he had intended to be about when he was twelve years old. The wait was useful. And I can say that the years I spent at the teachers college in Oregon, as well as the University of Regina in Saskatchewan were very useful in shaping me into what God needs me to be at this time my life, not to mention the years I spent at the chalkface, and even the years I spent on the road as a truck driver.

On the last day of Explo 72, there was a rock concert in a wide open space in Dallas. It was actually a piece of land that had been cleared for the construction of a freeway, but the freeway had not been built yet. I would venture to say that the thousands of people who rush back and forth over that freeway today are ignorant of the Godfest that lived in that space for one brief moment in time.

I don’t remember what Billy Graham said. It’s just been so long ago. But I do remember Larry Norman. He was talking and singing at the same time. I don’t remember the names of the songs, but one little snippet of his remarks has stayed with me over the past five decades:

Jesus gave much the same message to his disciples: “Greater things than these shall ye do…”

When the huddle is over, it’s time to play ball. And the game is more important than the huddle, even though the huddle makes the game more efficient and effective.