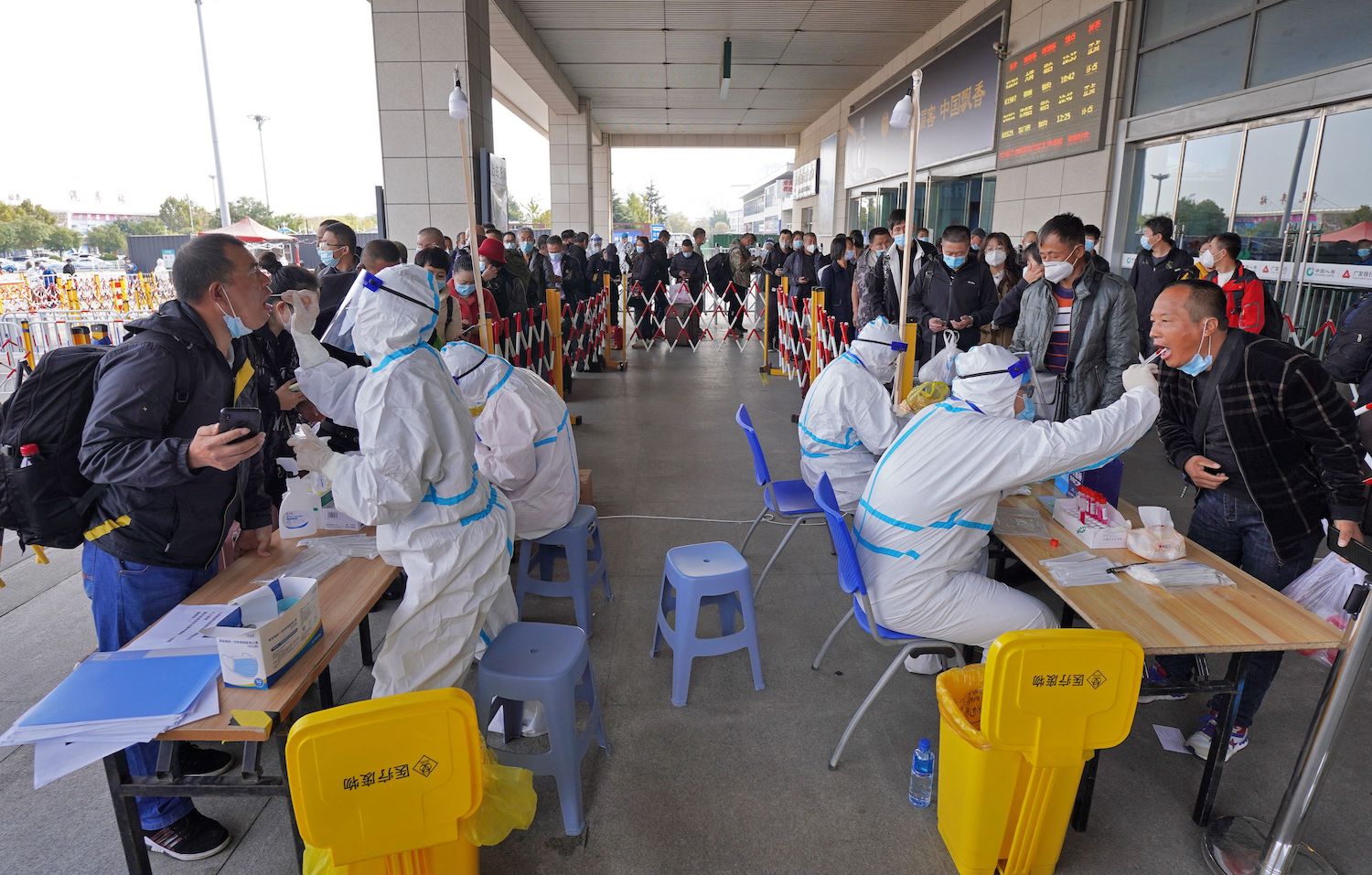 Go to Google and type in the word COVID followed by the name of a city. Be sure to spell the name of the city correctly. When it comes up, scroll down until you see the graph and then go to the top left corner of the graph and change it to “All time.” The default is one year, but COVID is not quite three years old, so there’s no reason not to view the total span of its existence.

In the screenshots below, it’s a little confusing to read the dates at the bottom because what I have here are static images, so they don’t show the year (2020, 2021, or 2022), but if you go to Google and do it yourself, the live online version of each graph will have a slider that allows you to go back and forth, and that will show the year.

So what can we conclude from this? Clearly from the graph of Beijing below, the recent spikes have been astronomical compared to before. If you pan across the graph from January 2020 until now, you will see a few blips. At the time that they happened, they appeared as huge spikes, because the scale of the graph was much smaller. If one hundred new cases a day is considered an astronomical number (which it used to be in China), then some of those blips would go almost to the top of the graph. So when you look at a graph like this, it is always important to take note of the scale. Simply put: What is the highest number? 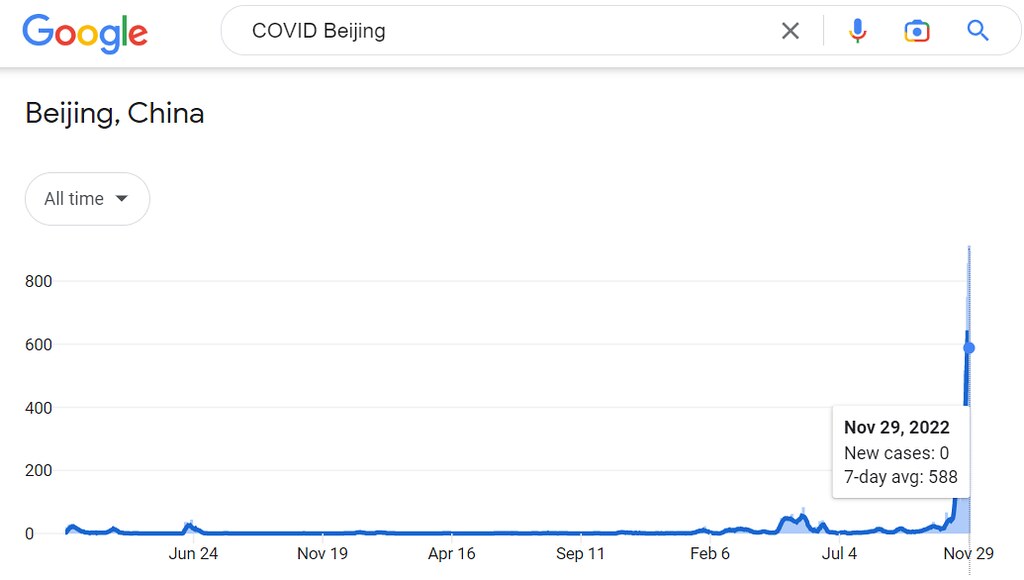 Guangzhou (below) looks similar to Beijing, but if you look at the numbers on the left side, it’s clearly much worse, because the top number is about twice that of Beijing. But although the cases are much more numerous, the pattern is the same. Nothing that happened before begins to compare to how bad it is now. 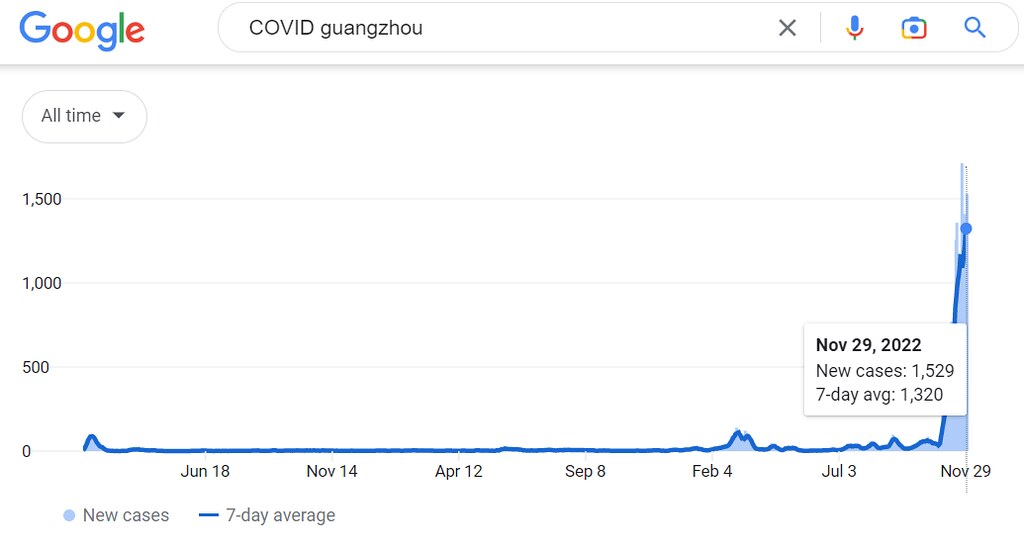 There are probably a few reasons for these spikes, but I think the main reason is that the latest versions of COVID are much less deadly than before, but they spread much faster. This phenomenon is challenging China’s zero covid policy. But there is something else that is providing a much greater challenge, and that is the current unrest. There have been major demonstrations in several cities. This is unprecedented. But why are people so upset? What has changed?

There are lockdowns, but there have always been lockdowns. In America, they say “lockdowns don’t work.” It’s more accurate to say “American lockdowns don’t work.” You see, for lockdowns to work they have to be total. But you can’t do that in America. American lockdowns are a joke. I remember when CNN had a special feature for Chris Cuomo when he came out of COVID seclusion.. It was a farse. There were videos all over the Internet of him being out on the street during the time that he was supposedly quarantined. That doesn't happen in China.

There are levels of lockdown in China, but they are all pretty Kafkaesque compared to America. Some friends of mine were locked down for about ten days or so because someone in their compound tested positive for COVID. The police put a divice on their door so that if they tried to open it, the police would be notified. But my friends took it in stride.

A friend of mine was just released a couple days ago from a five-day quarantine at her home. In her case, she could leave her apartment, but the door to the building was locked. She could not go outside. I have another friend in Xi’an who was quarantined for some time. In his case, he could leave his apartment, and even leave his building, but not his gated community. By God’s mercy, it has not happened to me. I wouldn’t like it. I guess nobody likes it. But Chinese people have been amazingly accepting of these measures. Look at this graph from Shanghai: 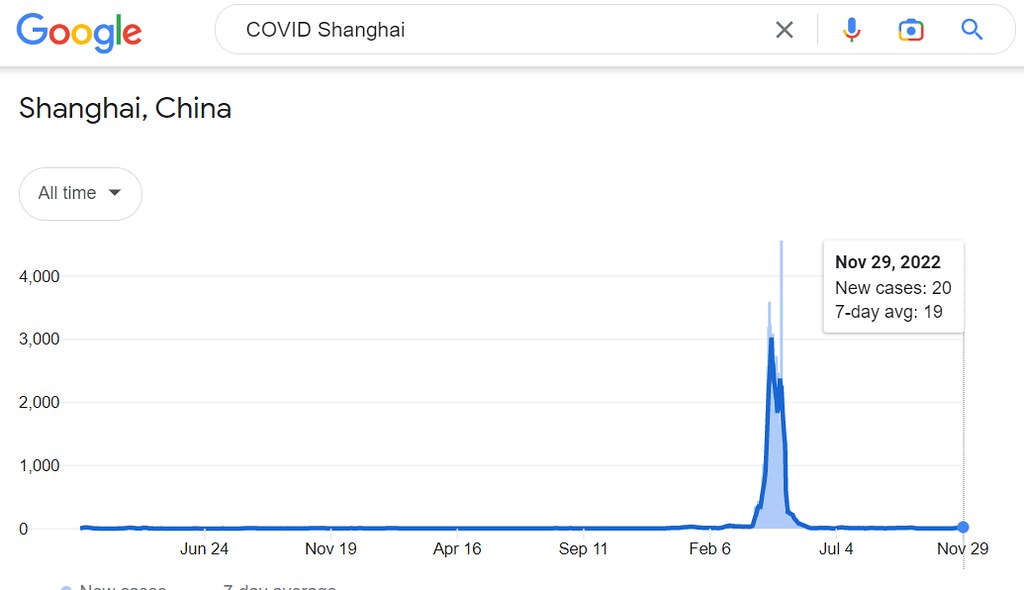 What does this graph say to you? I can tell you what it says to Chinese government officials. They look at this and say, “See, lockdowns work.” Are they right? Well, no doubt they are, you have to admit that. But again, how long can people be expected to tolerate endless lockdowns? As I said, in China, if you’re locked down, you really are locked down. It’s not a suggestion. But most people see that as a needful part of containing COVID and tend to accept it. I do think it adds to the stress that has created the current explosion of anger, but it’s not the main thing. 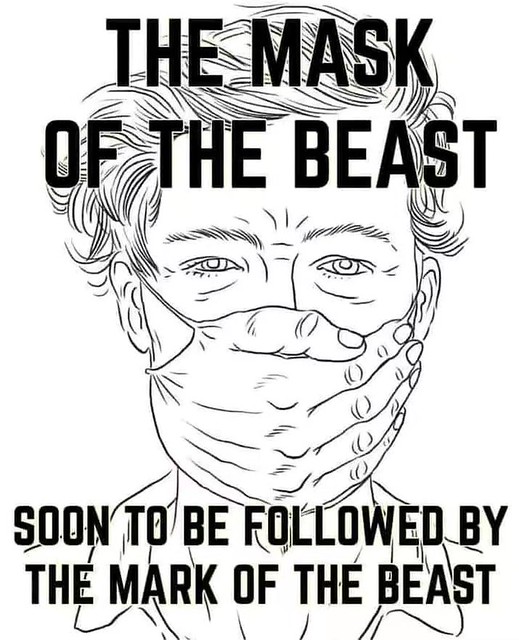 So what is the main thing? Masks? For the most part, people accept them, I think. In America masks have become a huge point of contention, but not really in China. In America, Republicans see masks as an assault on their freedom. Mask haters in America get really crazy about masks, They see them as sinister and evil. But Democrats are no better. Democrats preach masks, but don't actually wear them. Message to Democrats: If you put your mask on for the cameras and then take it off as soon as the news camera is off, does it not occur to you that a Republican with a cell phone might be there ready to document your hypocrisy? The simple fact is that Americans, both Democrats and Republicans do not like masks and do not wear them.

But in China they are more or less accepted. You see a lot of people wearing them under their chins, but they are there in case they are called for. Here’s the thing: If you show up at the subway station and see a big sign that says, “Everyone who has COVID please wear a mask so that you do not infect other people,” how many people with COVID do you think will be wearing a mask? Obviously none. They’re not stupid. But if the sign tells you that you will not be allowed to board the subway if you are not wearing a mask, then what percentage of those who have COVID will be wearing a mask? Obviously all of them. You see, masks don’t protect you from anything. But they do protect others from you. At least a little bit. Subways are a veritable incubator for viruses like COVID. No surprise that COVID spread like a wildfire in New York during the early days of COVID. So in your normal activity, you will not want to wear a mask. But if you get on the subway, you will wear a mask even though you are not sick, because that is the price you givc in exchange for assurance that everyone else is wearing a mask to protect you.

So if not lockdowns or masks, then what is the issue? But I shouldn’t really imply that lockdowns and masks are not part of the issue. They certainly add to the frustration—especially the lockdowns. I guess you could say that the lockdowns helped to fray the nerves of the people, but they didn’t result in an explosion of anger, because they had a certain legitimacy. The laobaixing accept them as needful, even though they are really getting tired of them.

But the thing that has really incurred the ire of the people is the COVID testing. Testing itself is not new. It has been around since the beginning of COVID. But recently, the government has started to require them for more and more things. Before, you needed a COVID test to get on an airplane. But now you can’t even get on a bus or subway without one. I can’t pinpoint exactly when this change happened, but it must have been sometime in August, because I have to go to the Entry Exit office every month to get a 30 day extension. I went to that office in August with no trouble. But when I tried to go there in September, I was refused entry because I did not have at least a 48 hour test. I was surprised. Nobody had told me anything about this. I had never had a COVID test in my life. Now, I don’t have much to complain about, because I don’t have to go to that office but once a month. So it’s a mild annoyance for me. But what if you work in a government office? You wouldn’t have to get one every day, because most places will accept a 48 hour test. But you would have to get one every two days. There are testing sites set up on the sidewalk around the cities, but the lines can be kinda long, and it’s just more than the masses were willing to put up with. 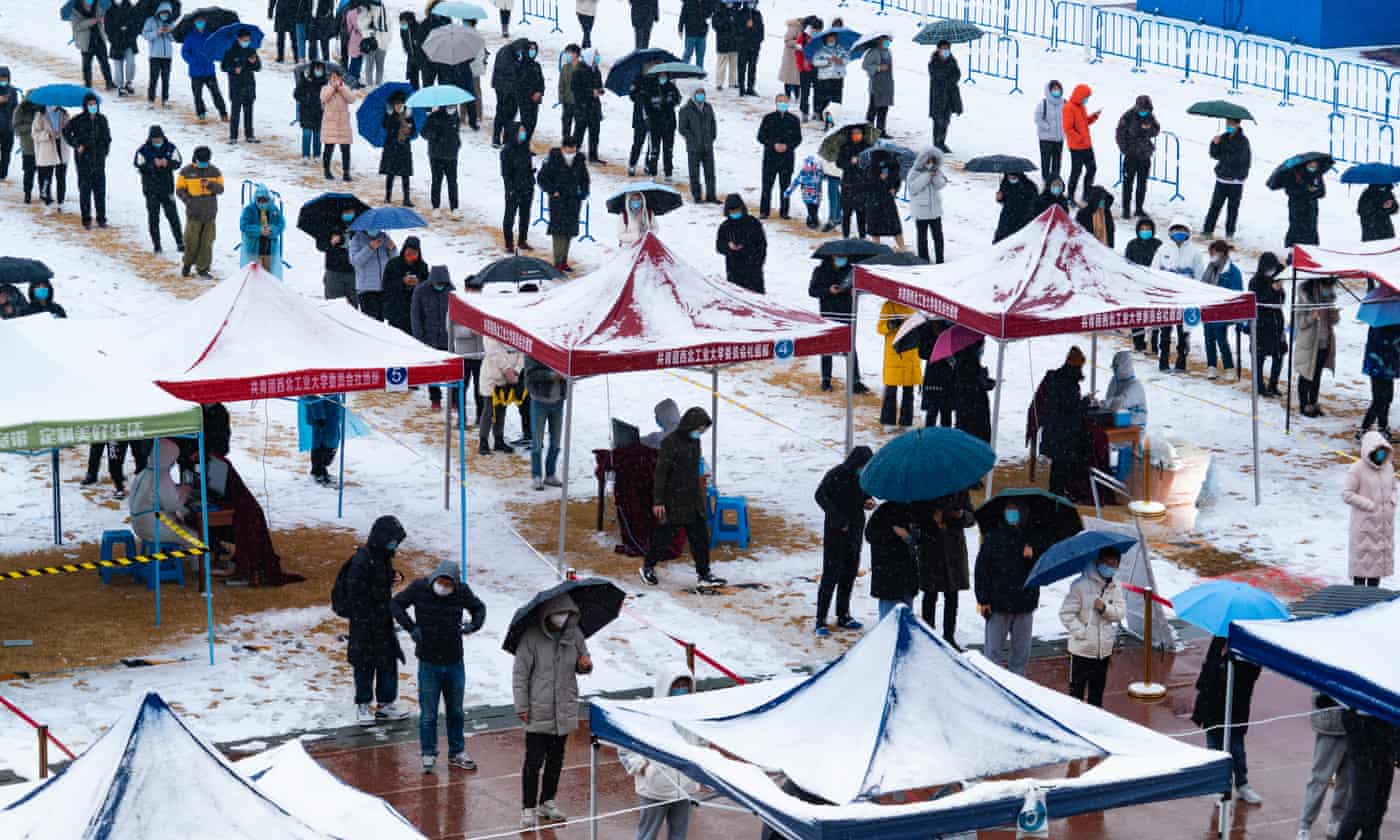 Back in January, a pregnant woman in labor was denied admission to a hospital because her COVID test had expired. She was forced to wait outside. She began bleeding heavily, so she was finally admitted, but the baby died. But recently the kinds of things that require a COVID test have increased, and well, you know, it just reached a breaking point. I heard that what triggered it was a fire in an apartment building in Ürümqi. I guess some of the doors had been welded shut or something to keep people from leaving, since there was a lockdown. Anyway, ten people were not able to get out, and perished in the flames. So that was the trigger. But the demonstrators are not attacking lockdown. They are tearing down testing stations.

So what will China do? There have to be changes. But China is in between a rock and a hard place. If they declare the pandemic to be endemic, cases will almost surely skyrocket, because there is little or no herd immunity in China (thanks to the Zero COVID policy).I am conflicted about this, because there is no question that I have benefited hugely from China’s policy. But I feel a bit guilty too, because my safety has been at the expense of people who have had to go through a huge amount of hassle that I have not had to deal with. Sometime ago, Singapore officially declared that COVID was now classified as “endemic” rather than “pandemic.” That’s a pretty big change. But can China do that? Is COVID over just because we say it’s over? Look at this graph for New York City: 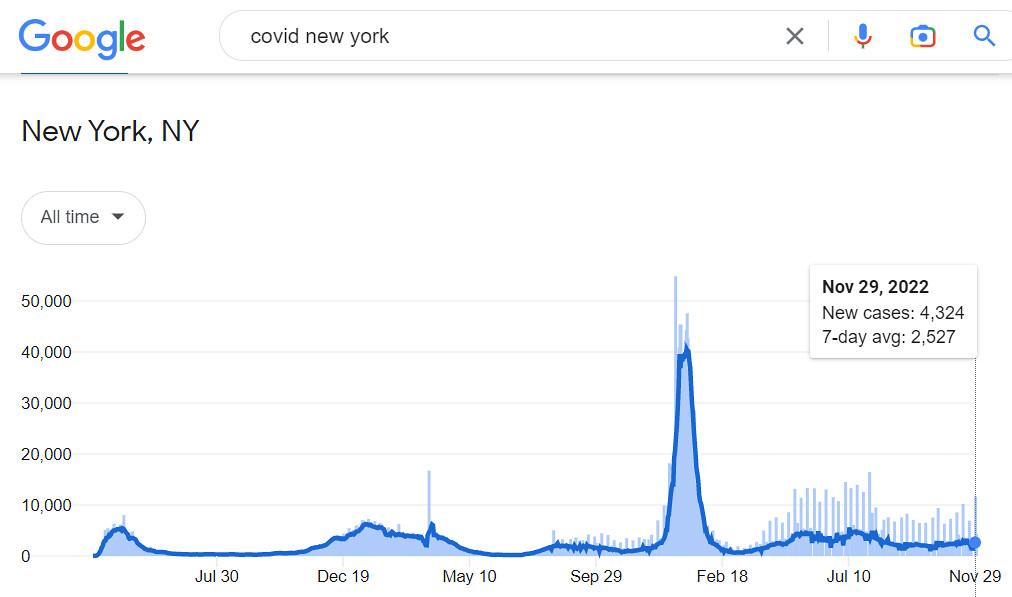 So you look at this and you say, “ OK, it spiked, but now it’s down to nothing again, so COVID is basically over. Nothing?? Over?? New York’s “nothing” is much higher than any of China’s spikes. But the contrast is much easier to illustrate if we look at death rates rather than new cases. Here’s China. This time, I changed the default setting (you can't see it in this screenshot) from “New Cases” to “Deaths,” hence the grey color: 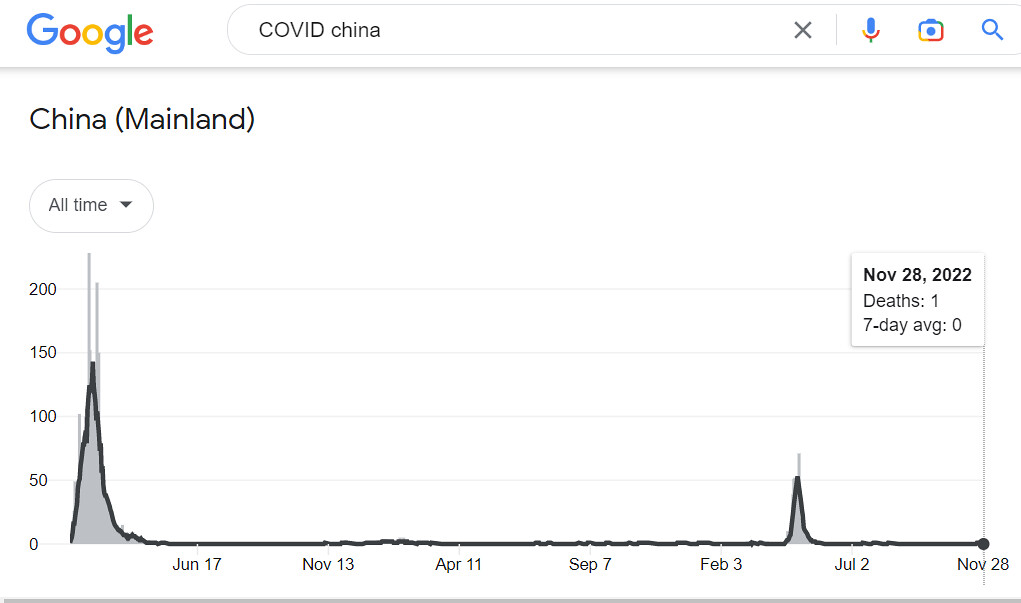 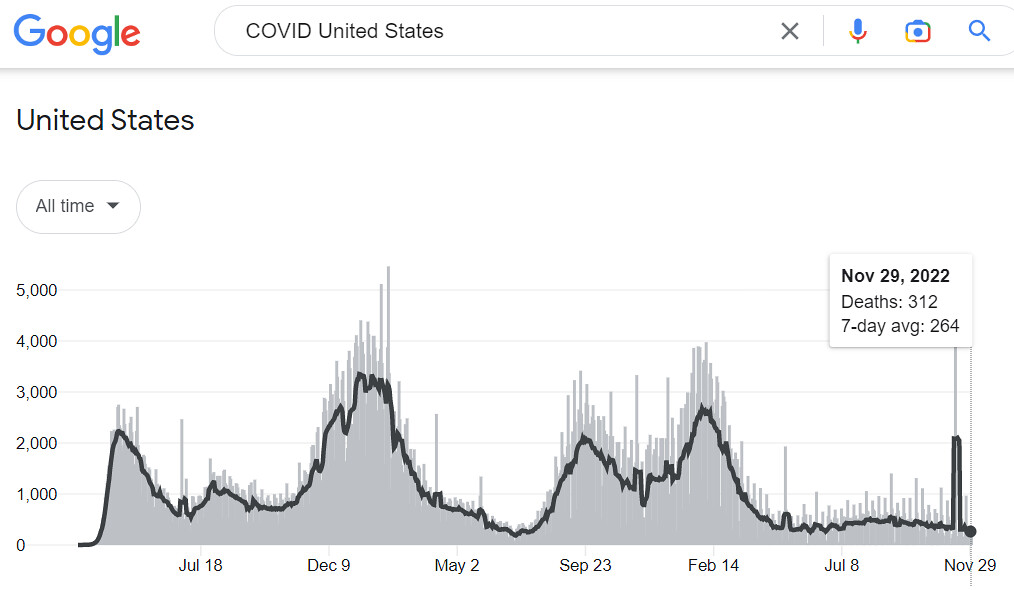 China has five times as many people as the United States. But are China's numbers accurate? I don't know. But I think it's pretty clear that but for China's dreaded COVID policies, lots and lots of Chinese people would be dead. There will be changes, because the demonstrations are very concerning to the leadership. People are really, really angry. But I don't know that China is quite ready to give up Zero Covid just yet. That might be awhile.