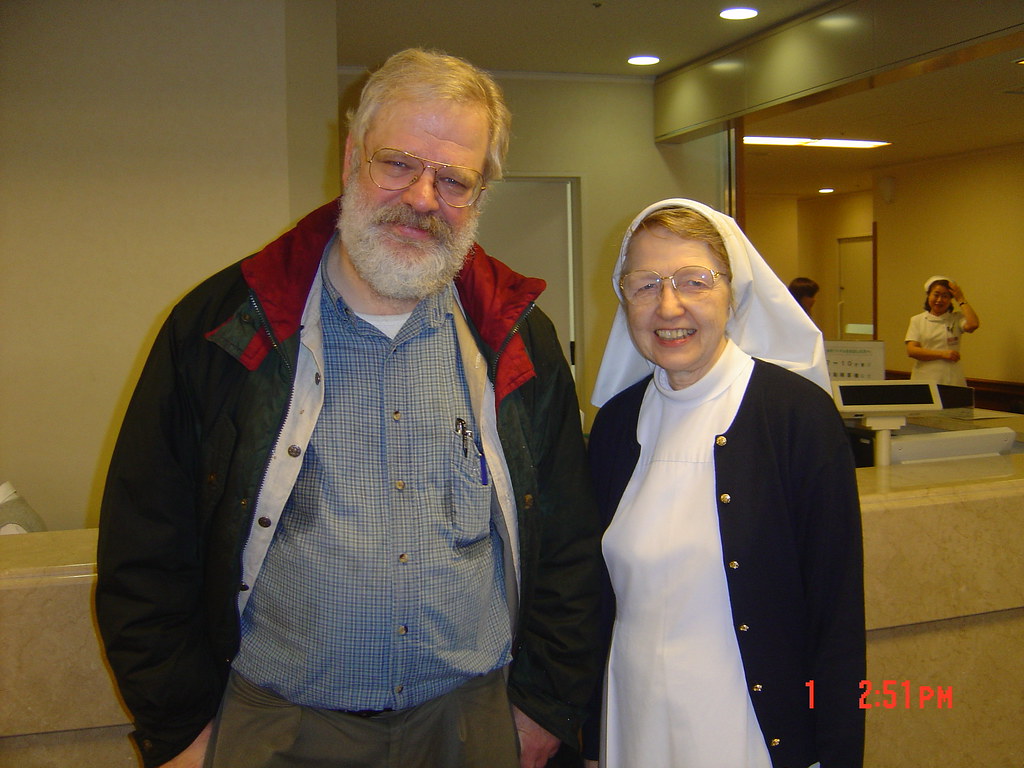 I suppose everyone needs to return to the place where life began at least once in that life. Today I met Bulu and his girlfriend at the West Exit of the Shinjuku station, and we went to a restaurant to have lunch. This time I took the bowl of oyako-don. I had enlisted Bulu and his friend to help me find the International Catholic Hospital, which is where I was born.

After lunch, we took a local light-rail to a different part of town, and walked a few blocks to the hospital. It turns out that the hospital had just been remodeled a year or two earlier, so it did not look the same as it did when I was born. That didn't matter to me, because it was a long time ago, and I didn't remember it anyway. But I did meet a nun there by the name of "Sister Barbara,” who had been at that hospital since the sixties, and was well acquainted with Dr. Eitel, the German missionary doctor who delivered me almost 52 years ago. Dr. Eitel was one of the many Western missionaries who were kicked out of China after the Communists took over following World War II. He had served as chief consultant of a hospital in Changsha in Hunan Province for about thirty years before coming to Japan. According to Sister Barbara, he did quite a number of deliveries during his years here in Shinjuku.

The lady who showed us around was very friendly. She showed us some old pictures of the hospital at various stages of its life over the past 70 some years of its history, including a shot of the hospital personnel standing on the roof, receiving drops from the US military after World War II.

Seibo (Holy Mother) Byoin, as it is called in Japanese, is still a prominent hospital because of its international status, being utilized by various embassies. I don't much like hospitals. In fact, this is the only place I have ever been hospitalized. I was pretty sick then, because Mom had Hepatitis A when I was born prematurely. Nobody remembers the place where they were born, and there isn't really anything about the community that is familiar to me, because I did not grow up here. My home was in the countryside of Northern Japan. Still, it is interesting to go back to the place where everything started. And even though I don't like hospitals, this place does have a pleasant atmosphere.