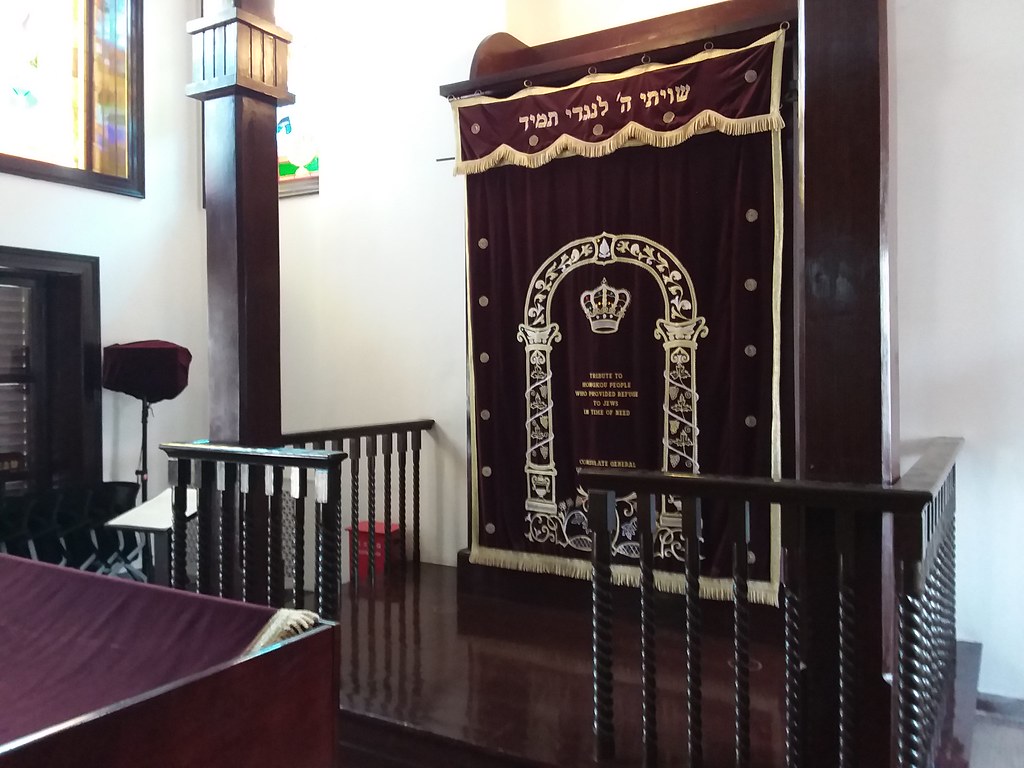 This the picture I took in the old Ohel Moshe Synagogue
in Shanghai, which is now the Jewish Refugee Museum.

Throughout the Diaspora (71 AD to 1948), the Jews were scattered to the ends of the earth. It seems that every country has their "Jew story." The Jews came to China in three places. First, they came to Kaifeng during the Song Dynasty.

The second main entry of Jews into China was over a hundred years ago, when the Russians made an agreement with China to allow them to build the railroad across the northeast tip of China, because they wanted to go straight to Vladivostok from Moscow. If you look at a map, you will see what I mean. Anyway, the agreement gave them the little village of Harbin, which the Russian Jews built into a prosperous city.

The third place the Jews came to was Shanghai. That was during the years before World War II, and the reason they came that time was in order to get away from Adolf Hitler.

I went to Kaifeng back in 2005 to study the Kaifeng Jews.

In February of 2009, I went up to Harbin in Heilongjiang Province to study the Harbin Jews But until last week I had never been to the neighborhood in Shanghai where the Shanghai Jews lived under Japanese occupation. Since this was my first visit, I focused on the museum (located in the old Ohel Moshe synagogue) rather than the neighborhood itself. So I need to come back again, probably several times to see the rest of it.

Shanghai was far from a perfect solution--I mean showing up in a city occupied by a foreign power--but in a strange way, it was a gift from Heaven for the Jews, because the Japanese had made Shanghai an open city. You could enter without a visa. Refugees streamed in, and this became the Shanghai Ghetto.

The following video gives a powerful and tremendously informative description of the Shanghai Ghetto by the Jewish children (now grown, of course) who lived there. This is a small, but very important part of the Jewish story. Do not try to understand Israel today without this history under your belt.

I should note that there is a brief silent spot toward the end of the video where there is no audio for about half a minute while they are showing pictures of the holocaust. You might want to keep your eyes closed during that part.