Japan in the Sixties 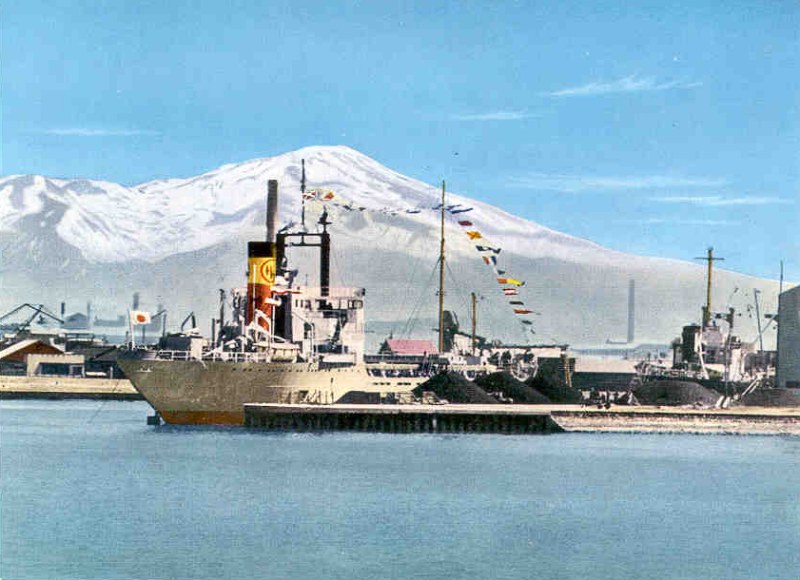 This video begins with my parents' wedding in June of 1948 and then jumps to the early sixties in northern Japan where I grew up.

In the days that followed World War II the field of operations for various missions was set out. I am not sure who made these decisions, but the Norwegian-Americans were assigned the northern part of the main island (Honshu). Northern Japan was a third world country in those days, and it might have been considered the worst possible place to be sent. But it really fit Norwegian-Americans, because in many cases it was not more primitive than what they, as farm kids from the upper Midwest had grown up with.

But Japan was not the American Midwest. It was very much a pagan culture, and the cultural contrast took its toll. Most the the original missionaries who went out with my parents during the earlier fifties quit soon afterward. What had began as a major thrust (in response to General MacArthur's call for 10 thousand Protestant missionaries) dwindled to a few families. The adjustment was just too much for most people. As a kid I had no comprehension of this. For a child, the gentle countryside of Northern Japan was Heaven. 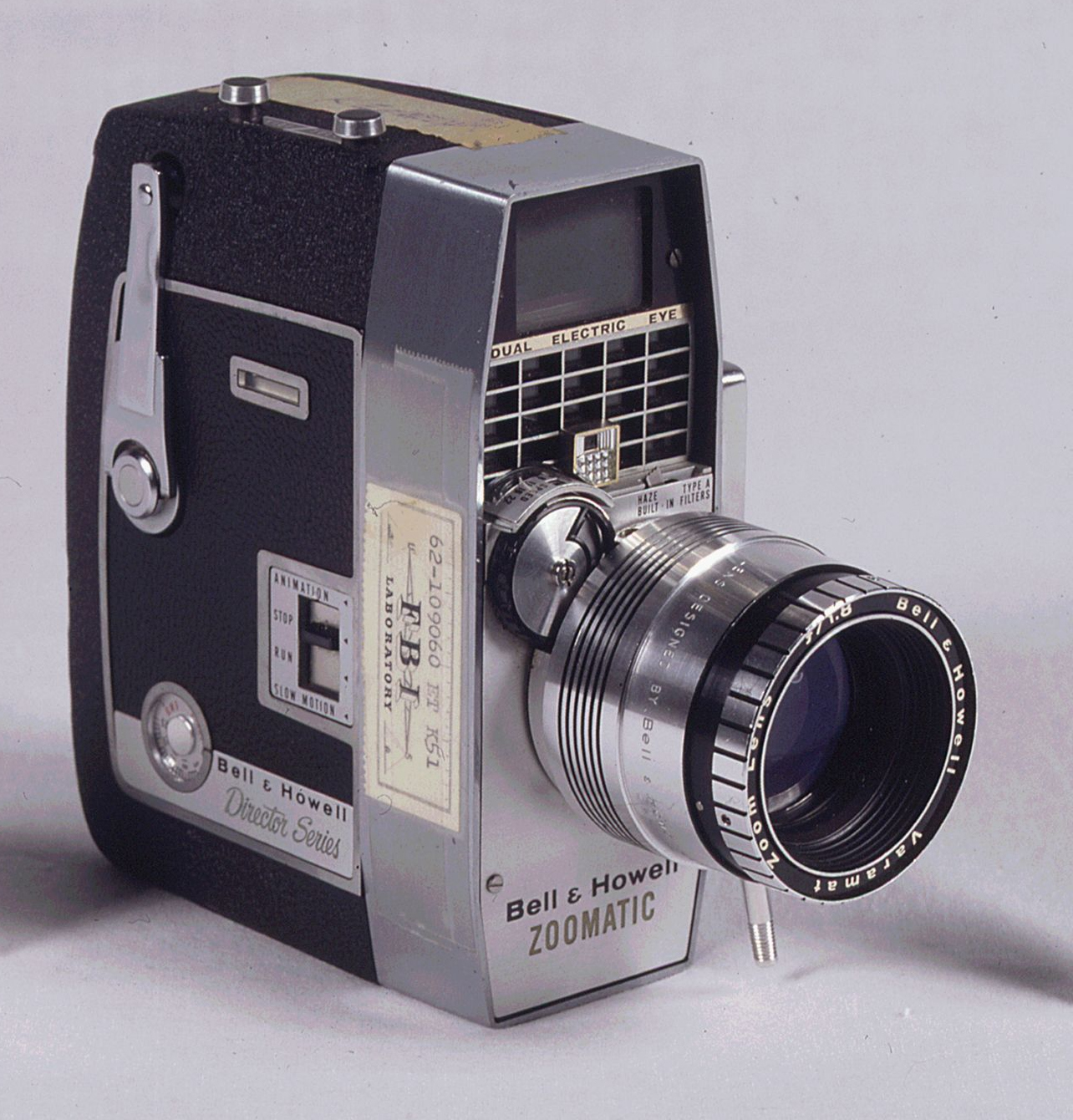 Japanese people tend to be indulgent toward children, sometimes to the point of absurdity, but you can bet we took full advantage of it. We loved Japan. Like the adults, we also went through a very difficult cultural adjustment. But it was the reverse of our parents. For us, it happened when we "returned" to the United States, a country of which we were citizens, but a country in which we found it very difficult to feel at home.

But even though we liked Japan, were were not really Japanese, so education was always an issue. Some of the American missionaries in the countryside sent their kids to Japanese schools because they did not want to send them away from home. They could come home every day. But, of course, there were things they missed in their schooling, which was designed for Japanese people. So some missionaries sent their children down to Tokyo to go to an international school. A good idea academically, but being so far from home, children were only able to come home for Thanksgiving, Christmas, and Easter.

The mission my parents were with found a compromise. They had a small school for children that operated very much like the one-room country schools they had attended as children in North Dakota and Minnesota, and then they sent their children to Tokyo for high school.

One of the best things Dad did when we returned to the field in 1961 after an extended furlough in North Dakota, was to buy a Bell & Howell movie camera. The camera you see pictured here is not Dad's. It is the camera used to film the Zapruder film (assassination of JFK). It is now held in the National Archives.

Although that took place in 1963 and Dad bought his camera in 1961, Dad's camera was actually a slightly newer version of this. I don't have a picture of it, but it looks exactly like this one, only newer. Perhaps it would seem primitive by today's standards, but it was really a pretty impressive machine. The 8mm camera was actually a modified 16 millimeter. It used 16 millimeter film. You would thread the film in the camera, run it through, then find a dark place, open the camera, turn the film over, thread it, and run it through again. Combine this ingenious device with Japanese color film, and you have a pretty good picture, with one caviat. It takes much more light to get a proper exposure on film than with digital. So anything shot inside would tend to be dark unless you had pretty powerful flood lights. But outside, the quality was pretty impressive for the time

The video starts in Sakata (after the wedding). It then moves to the school in Akita, and then back and forth between the two, and includes a few scenes from our small farm in Honjo. There is nothing here from Nojiri for some reason. In the field day segment, you can see an amusing scene of me trying to bat right-handed. Apparently the grownups did not realize that I was a southpaw. There was no way I was going to hit that ball. Not then, not now, not in a million years.

The little vignette of settlers traveling across the prairie in their covered wagon was Johnny's brainchild. He directed that segment, which was filmed in Sakata. Costumes were a problem. Pretty hard to find cowboy hats in Japan. But we found some straw hats in the market that were the next best thing. Use your imagination. We brave the wilderness all day long, crossing all kinds of terrain in our journey to the west. At night, we wearily build our campfire and prepare to rest for the night. Suddenly, Johnny sees an arrow. Indians! We hit the ground and start shooting at the Indians from under the covered wagon. Not exactly politically correct by today's standards, but if you watched television in the fifties and sixties, it was a pretty standard scene.

There is brief footage from the Navy base in Sakata. During the first term, this was an Air Force base. At that time, Dad was actually on the payroll of the US Air Force as an auxiliary chaplain. I am not sure when the Navy took it over, but the second term (until we moved to Honjo) it was run by the Navy. Dad was not on the payroll, but the Church in Sakata he had worked with so much the first term had a Japanese pastor, so Dad and the other missionary, who was Morris Larson at the time, took turns preaching at the Navy chapel. Larsons then got involved in Tsuruoka at some point...can't remember just how that came about. Anyway, the irony of the whole thing is that even though we lived in the countryside of Japan where nobody spoke English, I spent many Sundays in the chapel at the Navy base listening to Dad preach in English. 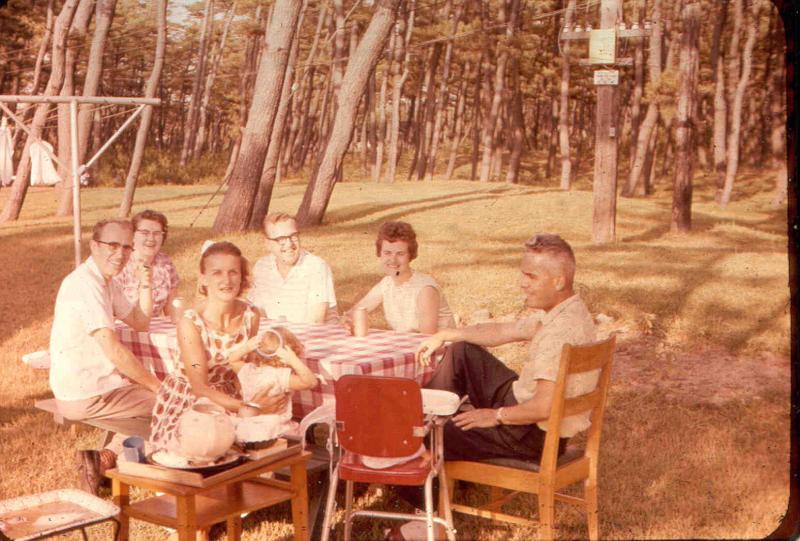 Above you can see a street scene of Nakamachi (from the old Sakatavets website) taken near the old mission house in Sakata. In this picture to the right, you can see Larsons and Mom and Dad having a backyard dinner at the Navy base with one of the officers (also from the Sakatavets website). I thought at first that it was Lt. Michaels, but it comes from the photo collection of a different officer, and the child appears to be a good bit younger than Shelley. Anyway, you can see both Lt. Michaels and his wife (and Shelley) in the video, so take a look and decide for yourself. We also went to the Navy base at other times. I remember a baseball game there once, and also a Halloween party and once or twice we were there for a Fourth of July celebration. But the Navy base closed down and left town and we moved to Honjo, so those days have passed into history, only to be remembered. Just before we left for the States in 1967, I gathered a bunch of the 8mm film reels that had survived the Honjo fire, got a pair of scissors and some scotch tape, and spliced them together to make one film that was about 30 minutes long. After we got to the States, Dad had gotten a Nikon and had lost interest in the old Bell & Howell. But I was fascinated with it, so the scenes in Fergus Falls were filmed by me. There is also brief footage of the Langager Family Reunion in 1971, which was at Lloyd Langager's place in Tioga. At the tail end is some stuff that looks like it was filmed at Mary's place in Eastern Oregon. No idea who did that.

In preparation for Mom and Dad's 40th wedding anniversary, Anne Marie or somebody took all those videos and had them digitized into this one story. I should note that there is one anachronism. My sister(s) inserted an video from the fifties. I guess they thought that was the building of the house in Honjo, but in fact, it was the building of the church in Sakata. Fortuitous mistake, actually, because that little bit of history never would have seen the light of day. You will spot it right away, because it is an island of black and white in an ocean of Sakura color. I would guess that it was filmed by Morris Werdahl, because I'm pretty sure that's one of his daughters in the video. By the way, the video does have audio, but it is delayed a few seconds