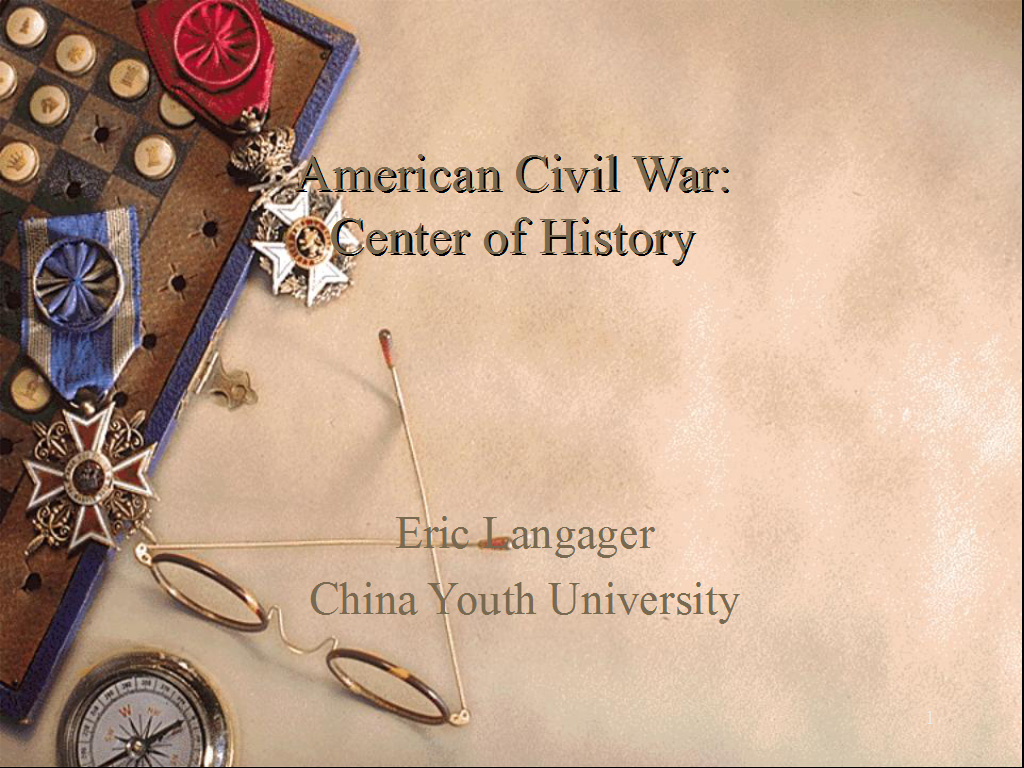 Right-click on picture and save link to download slide presentation .pdf file. I generally use Microsft Edge for reading .pdf files, because it is easier to scroll. But if you want to view it as a slide show, you need to open it with Adobe Acrobat, go the view menu, and then select "full screen." Then will be able to use the arrow keys to move back and forth.

Back in the spring of 2016, I gave a lecture at my university on the American Civil War. I thought perhaps I would put it online, but I got busy with other things, so it sorta got put on the back burner. After all, it's not the kind of thing most people are interested in. Then, in the summer of 2017, came the riot in Charlottesville. I was quite taken aback by this, especially all the fuss about tearing down statues of Civil War figures. That and the "Black Lives Matter" controversy has made me begin to think that perhaps there is a value in today's young people having at least a cursory knowledge of the issues.

My own experience with the Civil War goes back to 1960, the 100th anniversary of the Civil War. As we will discuss, the Civil War broke out after the election of 1860. Sometimes in America, a candidate is elected that nobody expected to win, and the losing side gets really mad. That's what happened in 1860. Anyway, I started first grade in the fall of 1960. It was 100 years after the South seceded and it was also an election year. Kennedy was running against Nixon. Dad took Johnny and I down to Woolworth's. I got a blue cap and Johnny got a grey cap. That was all you really needed to play Civil War.

Throughout the sixties and seventies, the issue of race was kept alive, but partially overshadowed by the Vietnam War. I maintained an interest in the Civil War, but did not study it actively for twenty years or so. Then, in the eighties, I began a ten year study of the Civil War. I have always tended to study history by biography. In other words, instead of reading a book about events, I will study the players on the stage one at a time, and then piece together the events from what I have learned about those events by studying the people who made them happen.

When I began my study of the Civil War, my objective was fairly simple: I wanted to know what a winning general was like, and I wanted to know what a losing general was like. How do losers think? How do winners think? For example, in examining the lives of Grant and Lee, I noticed some interesting contrasts. Lee was brilliant. And he was a very disciplined, perhaps even a bit repressed, human being. In contrast, Grant had a more laid back personality. Lee went through four years of West Point without a single demerit. Grant wasn't at West Point more than a few months when he wrote back to his people, "Every time you turn around they give you one of those little black marks."

Grant came from a very stable, perhaps you could even say boring family. Lee came from a broken home (he was the son of Light Horse Harry). Grant was inclined to believe that keeping the Union together was of paramount importance for the stability of the country. In other words, if you keep the country together, the citizens thereof are better off. Lee was more inclined to think that sometimes division is necessary when two parties find it difficult to get along. Grant fought for the sake of the whole union, not for just his own state. Lee sacrificed the good of the union to defend his own state. The result of Grants victories was that the union was preserved, and the individual states thereof (including his own) were better off. The result of Lee's efforts were that the South was destroyed, and his own beloved Virginia was forever divided, never to be unified again.

You might say thay my observations are a bit amateur, and I would not argue. I am not a professional historian, and perhaps I have made a bit much of Grant's mediocre success in worldly pursuits--his lack of a career, so to speak. I make him sound like a loser, when he was actually a very good man. But the contrast between his lack of success in everything he tried, and his extraordinary success in battle is so profound that it cannot be ignored.

But something happened as I moved through the history of the Civil War. My knowledge of the characters increased, but my objective also altered somewhat. Sometimes, when you examine an event, and try to identify and study the major players, you run into a personality so profound that it eclipses all others. This happened to me. I studied mainly the generals, both North and South, but one personality emerged that could not be ignored, and that stood out as a defining character of the conflict. That personality was Abraham Lincoln.

Lincoln was either loved or hated. Coming from northern culture (North Dakota and Minnesota) we were always taught to admire Lincoln. But there were Southerners who thought of him as a very bad man. Like my friend Bill. Bill was from North Carolina, but he taught in the country schools of North Dakota for many years. That's where I met him. I was teaching Palmer School, and he was at Stoney Creek. In the country schools in North Dakota, the front of the classroom had a standard appearance. There was a flag in the middle above the blackboard, then on one side, a giant picture of George Washington, and on the other, a giant picture of Abraham Lincoln. Later, I stayed at Bill's place in Bismarck during the time I was a lobbyist in the North Dakota State Legislature.

This was during the time that I was actively studying the American Civil War, and I used to bring up the subject from time to time. Every time I mentioned Lincoln, he uttered one static, unchanging statement. He never wavered from it, no matter how hard I tried to shake him loose. He said, "I'm not sorry Lincoln was shot. I'm just sorry he wasn't shot four years earlier."

I hesitate to even tell this, because you might get the impression that Bill was a hard guy. Nothing could be further from the truth. Bill was a poor boy from the old South who would never had much, but always shared what he had. I remember there was some controversy one time about Walmart clothes being made overseas in shops that paid less than a dollar an hour. Bill just could not make sense of it. "I don't know what they're complaining about. I used to mow lawns for twenty-five cents an hour."

I came through Bismarck one time in my truck and he had found a baby rabbit. He was trying to nurse it back to health, but the little critter just would not eat. This is a common problem for wild animals in captivity. So Bill decided let the little rabbit go. We drove to a large park in the city and walked to an open area. Bill set the little thing down, then he took his hat off his head and prayed to God to protect this little rabbit. He was that kind of a guy. But when I brought up the subject of Lincoln, same old answer: "I'm not sorry Lincoln was shot. I'm just sorry he wasn't shot four years earlier."

I'll have more to say about Lincoln later. Much more, because he was such a dynamic figure. But for now, just let me say that the change in Lincoln's thinking was, I have come to believe, the central drama of the American Civil War. He came to believe that God was very angry about slavery, and that if he wanted God to help him win the war, he had to help God put an end to slavery.

The effects of the civil war are pervasive. In this lecture I focus mainly on how it changed the status of the states with respect to the whole union. But later I want to talk about the residual effects of the Civil War on every aspect of American life.

I remember years ago when I was pulling a flatbed for E.W. Wylie out of Fargo, another driver and I were having lunch or something together. He was a Minnesota boy, and he was telling me about one time when he was south of Mason-Dixon and saw a driver with a cap that said, "Lee surrendered. I didn't."

Well, you can't do much truckin' in the old South without seeing that once in awhile. I said, "So?"

He said, "I went up to him and I said, "Grant accepted his surrender. I didn't!"

I laughed. War's over, boys. Give it a rest. But as we have seen from Charlottesville, it hangs on. Feelings run deep, even after all these years. On my father's side, I can get out of it. My grandfather came to North Dakota as a homesteader in the early part of the twentieth century. So my people on my father's side of the family were newcomers, relatively speaking. But my mother's people were from Bergen, and they came earlier. Among them were the brothers or cousins of my great-great grandfather, can't remember which, but they were in the Fourth Minnesota, and fought under Rosecrans in the Battle of Corinth. So even though I myself grew up on Japan, I'm a Minnesota Yankee on my mother's side of the family. I mention that because you need to be aware of it as you listen to me talk about the Civil War. There are so many things--things I am not even aware of it, that are affected by the frame of reference I was given by being born into the family I came from.

The slides can be watched a couple different ways. If you are the type of person who likes to scroll through just like a regular .pdf, you can just click on the picture above and the slides will open up and you can view them online. If you're like me, and you prefer a regular slide show, then download the file first, open it up in Adobe, and then go to the View menu and put it in Full Screen Mode, and then you can watch it just like a regular slide show, using the arrow keys to go back and forth.