How Old is China? 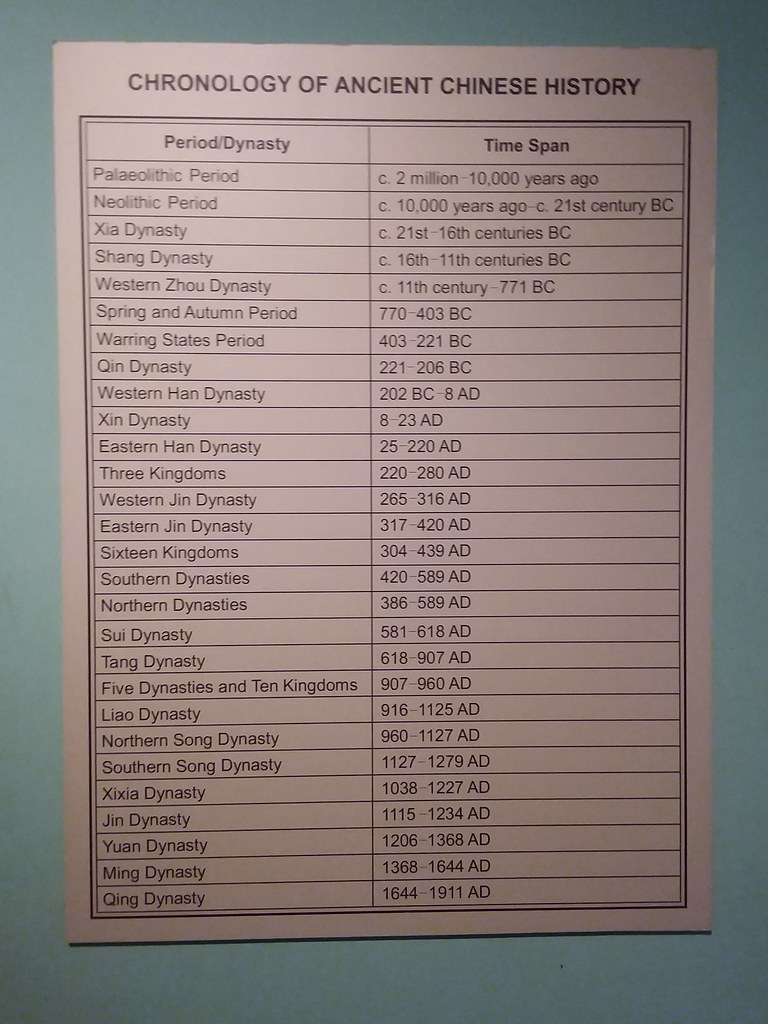 Last Thursday I went to the National Museum with some friends and saw this chart on the wall showing the dynasties of China. Studying the history of China is useful in helping to understand what makes a dynasty rise and fall, because China has had so many of them. Before I came to China, and even after I arrived, I found that Chinese people were fond of saying that China had five thousand years of history. So I would ask them, "Who was the first emperor of China?"

Then I would say, "Ok, if Qin Shi Huang was the first emperor China and the Qin Dynasty was a little over two thousand years ago, what did you guys do for the three thousand years?"

But the problem is that if you make the argument that China began with Qin Shi Huang, and is thus only a little more than two thousand years old, you have a problem. China is nothing if not Confucian, and Confucius lived in the sixth century BC, so that would bring the beginning of China back to at least 2600 years ago. But if you say that China began with Confucius, you also have a problem. Confucius never presented his ideas as new ideas. He always saw himself as restoring the Rites of Zhou established by the Duke of Zhou.

The Zhou Dynasty lasted longer than any other dynasty (790 years). That is remarkable. The chart pictured above is a bit confusing, because it does not explain that the Zhou Dynasty is actually divided into two segments, the Western Zhou and the Eastern Zhou. This chart shows the Western Zhou, but it doesn't tell you that the Eastern Zhou is actually composed of the two sub-parts that are listed here, the Spring and Autumn Period (during which Confucius lived and taught), and the Warring States Period.

I don't want to go any further in that direction, because the treatment of Confucius and his influence on succeeding dynasties is far too big a subject to be dealt with here. Suffice it to say that, in my opinion, Chinese dynasties have risen as they have stayed true to those values, and have declined as they moved away from them.

One further note: In my opinion, it is a mistake to refer to Qin Shi Huang as the "first emperor of China," although this is a very common practice. It implies that there really was no Chinese society before Qin Shi Huang, and that China was just a disorganized rabble. That may be true politically, but not culturally. In fact, as you can see, there were many rulers of China before Qin Shi Huang, spanning hundreds of years.

So how did this come about--I mean Qin Shi Huang coming to be thought of as the first emperor of China when, in fact, there were many monarchs before him? People in China usually respond that he was the first emperor of the unified China. Maybe. But in my opinion, a big part of it is due to the way he stylized his name:

It is evident that whatever we think of Qin Shi Huang, he thought of himself as the first emperor of China (or at least the first one that mattered), he stylized his name to reflect that, and he managed to convince succeeding generations of Chinese people to view him in that light.

Not me. I think he had an exaggerated view of his own importance. Don't get me wrong. I don't say that Qin Shi Huang was not important. That would be going too far the other way. No study of China's history is complete without a visit to Xi'an to view the Terracotta soldiers--more than eight thousand of them--who were buried with Qin Shi Huang to protect him in the afterlife. His own body has never been exhumed. He had himself buried in a sea of mercury. He was an extraordinary person, and his influence is important to understand particularly in light of the fact that Mao, who did not encourage the reading of ancient history by the masses, was a prodigious student of history himself, and saw himself as the modern version of Qin Shi Huang.

But calling him the first emperor of China is going to far, I think. The roots of Chinese culture precede him by centuries, and endured his attempts to minimize them in much the same way that Confucian ideas have survived the attempts of the early Communists to wipe them out.

So where does this all end? If you want to know how old China as China really is, you must go back before Qin Shi Huang. Confucius? No, keep going, all the way back to the first half of the Zhou Dynasty. Search there and you will find what makes China China.