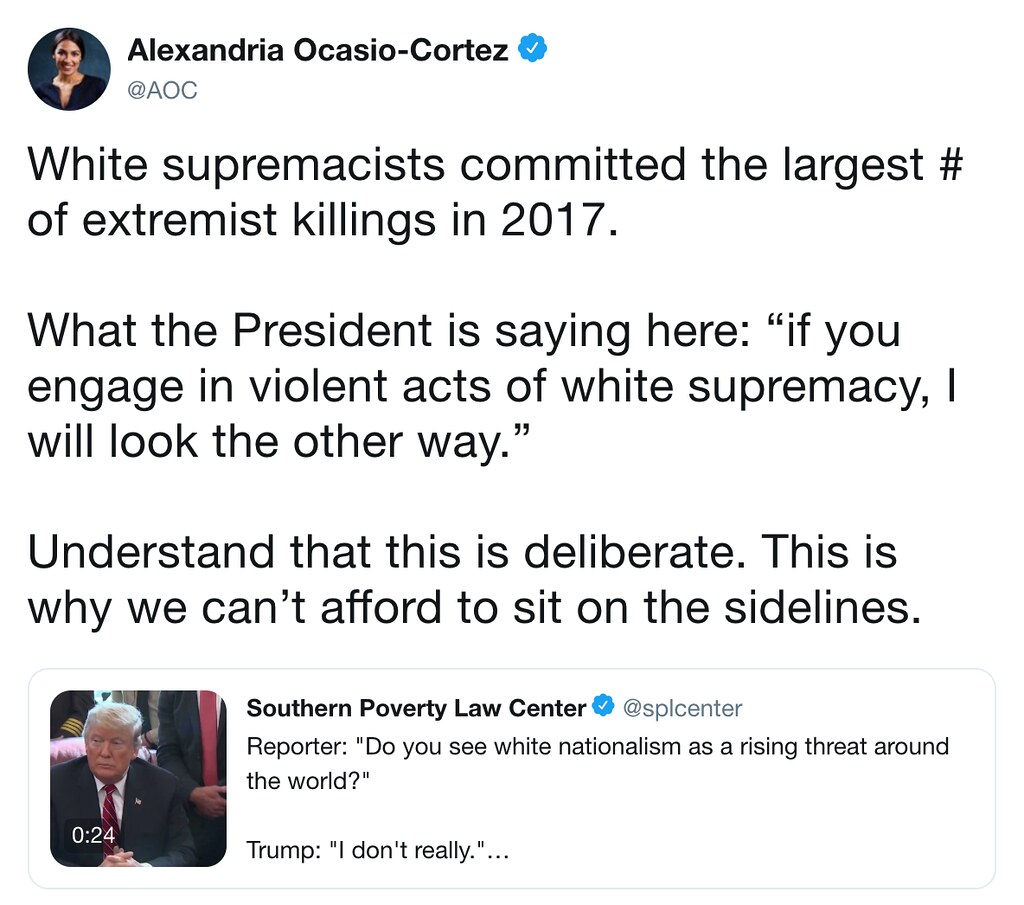 Context: Trump was asked if he thought White nationalism was on the rise around the world. He said that he didn't think so. So AOC concluded that this response meant that he would turn a blind eye to acts of terrorism. I was arrested by her bizarre conclusion, because I myself would have responded pretty much the way Trump did, and that doesn't mean I like terrorism.

This is a big subject. Hard to talk about it without bringing in so many side issues. It's very involved. To get the history, it may be to your advantage to give a listen to my podcast on the American Civil War, but you don't necessarily need to do it first.

Although I have been interested and concerned about this issue since I was a kid reading about the Underground Railroad, the thing that set me off this time was the media reaction to Trump's statement to the "Squad:"

[So interesting to see ‘Progressive’ Democrat Congresswomen, who originally came from countries whose governments are a complete and total catastrophe, the worst, most corrupt and inept anywhere in the world, now loudly and viciously telling the people of the United States, the greatest and most powerful Nation on earth, how our government is to be run. Why don’t they go back and help fix the totally broken and crime infested places from which they came. Then come back and show us how it is done.]

Now as I explain in the podcast, Trump applied this statement too broadly. For three of the four people, it doesn't fit. I don't want to elaborate here, because I explain it in detail in the podcast. But for one of them (Ilhan Omar), it fits perfectly. It is not racist, and is entirely appropriate. So let me edit the above statement to make it apply to one person:

[So interesting to see a ‘Progressive’ Democrat Congresswoman, who originally came from a country whose government is a complete and total catastrophe, the worst, most corrupt and inept anywhere in the world, now loudly and viciously telling the people of the United States, the greatest and most powerful Nation on earth, how our government is to be run. Why doesn't she go back and help fix the totally broken and crime infested place from which she came. Then come back and show us how it is done.]

As you can see, the only thing I have changed is the reference (from three persons to one person). There is nothing racist about that statement. It is a very appropriate and needed exhortation. I certainly do not deny that Trump has said things with which I do not agree. But I could not agree with this one more. But it happens to be a criticism of a person of color, so to the media, it is automatically regarded as racist. That's stupid and dishonest. When you define racism as disagreeing with a Black person, you have robbed it of any significant meaning.

But, as I mentioned in the podcast, the thing that really set me off was watching a CNN "journalist" who was interviewing some folks about racism. She read a definition of racism from a dictionary, by which definition Trump was clearly not a racist. She then looked triumphantly at them as if she had just proven that Trump was a racist. This made me realize that I had to come up with a definition for racism that is so simple that even a CNN journalist can understand it. So here it is: A racist is someone who believes that moral qualities are genetically derived. That's it. Very simple. Even a CNN journalist could figure it out. I am not a racist. I do not believe it is right to present someone's ethic grouping as being morally inferiur. Genes are morally neutral. But I am a critic of culture. Culture is not morally neutral. As Frances Schaeffer said, "If there are no absolutes by which to judge society, society is absolute." I have been a student of culture since I moved to America when I was thirteen years old. I do believe that people of conscience should stand in judgment of culture when it strays from the moral standard God has written on our hearts--such as Confucius (孔子) in The Analects, which I read from in this podcast. So I guess you could say I am a culturist. Here then are the definitions we are going to be using in our discussion of this subject:

racism the belief that moral qualities are genetically derived

If you don't like my definitions, you can throw them away when you finish listening to this podcast. But if you listen carefully, I hope you won't want to.

The video below contains a discussion about Kanye West. In the video, Bakari Sellers says "This is what happens when Negroes don't read." This is a reference to a Chris Rock comedy routine from the nineties. You don't need to watch all of that comedy routine, but if you can manage to endure the first three-and-a-half minutes, you will hear the statement that Bakari Sellers paraphrases in the video below. Clearly, Sellers is saying that Kanye West belongs to the category of Black people to whom Chris Rock is referring. That is unfair and disgusting. Listen yourself and see what you think.

The Warmth of Other Suns

Gone With the Wind